It’s the remedy most dear to the heart of modern medical practice: a pill. Just a prescription pill that you can take to treat your condition.

No such pill exists for sleep apnea, so when a new cannabinoid pill showed promise for treating sleep apnea, there was significant excitement. However, more trials have shown the pill is probably not going to be an effective treatment for sleep apnea .

Apneas Reduced, but Not Sleepiness 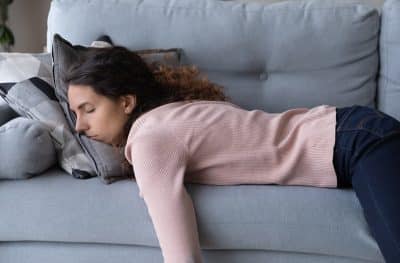 In order to get clinical approval from the Food & Drug Administration (FDA), a drug has to undergo three levels of clinical trials. Dronabinol–derived from a cannabinoid agent–proved to be effective in a phase I trial. It was safe, with few side effects, and it reduced the apnea hypopnea index (AHI), an objective measure of how often a person stops breathing during sleep.

Cue the phase II trial, which involved more people in an attempt to determine the true effectiveness of the drug. The trial involved 56 people with sleep apnea–confirmed by polysomnography–who were randomly assigned either placebo treatment, or one of two doses of dronabinol for six weeks. Every two weeks, researchers gave subjects sleep tests and used two measures of sleepiness to determine the effectiveness of the drug. The Epworth Sleepiness Scale (ESS) was used to determine subjective sleepiness–how sleepy people feel–and the Maintenance of Wakefulness Test was used to determine objective sleepiness–how likely they are to doze off.

So why would dronabinol reduce AHI but not sleepiness? We’re not sure, but another recently published study gives us clues. In this study, researchers wanted to investigate the mechanism of dronabinol’s sleep apnea benefits. They configured rats so their sleep data could be better monitored. Researchers then gave the rats dronabinol.

Dronabinol might help with AHI because it affects the vagus nerve, improving tone in the airway during sleep. But at the same time, dronabinol changes the rats’ sleep patterns. When on dronabinol, rats spent a lower proportion of their time in REM sleep. Because REM sleep is vital to rest and rejuvenation during sleep, this could account for why people don’t feel more rested after taking dronabinol.

The other problem with the dronabinol research is that it is unnecessary. A prescription pill for sleep apnea might be profitable for the pharmaceutical companies, but it wouldn’t have much benefit for sleep apnea sufferers. That’s because people with sleep apnea already have a treatment option that’s just as convenient and already proven to be effective.

Oral appliances are safe, effective, and easy to use. They have few side effects and they’re very convenient. About as convenient as taking a pill, in fact.

If you’re looking for a convenient and easy to use sleep apnea treatment in Omaha, please call (402) 493-4175 today for an appointment at the Advanced Dental Sleep Treatment Center.