If you have sleep apnea, you are looking for a treatment that will help you combat the negative effects of the condition. You want to reduce or eliminate your daytime sleepiness. You want to find your energy and motivation again. And you want to avoid the negative health consequences of sleep apnea, such as cardiovascular problems and metabolic problems.
And that’s why CPAP isn’t always the best treatment. Although CPAP has a very high efficacy, its effectiveness isn’t any better than oral appliance therapy. 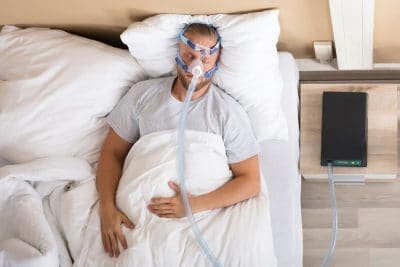 Efficacy is the absolute ability of a treatment to treat the condition it’s being used for. In other words, it’s the ability of CPAP to completely eliminate sleep apnea when it’s being used. With enough pressure, CPAP can allow anyone to be free of sleep apnea — while they’re wearing their mask.
But in order to really be an effective treatment, the treatment has to actually be used, and that’s where CPAP’s problem starts. If a person isn’t using CPAP, they have untreated sleep apnea for every night or portion of the night when they’re not using CPAP.
Compliance rates for CPAP may be as low as 50% after only six months on the treatment, and as low as 17% after five years! In other words, 83% of people prescribed CPAP essentially have untreated sleep apnea after five years.
And then there’s the question of whether CPAP compliance is enough to get an effective treatment. Typically, CPAP compliance is defined as using CPAP for at least four hours a night, 70% of nights. That could be as little as 35% of the time spent sleeping.
And, what’s more, some science indicates that even four hours a night every night might be inadequate for treating many common health effects of sleep apnea, such as diabetes.
Studies indicate that it takes about four hours of CPAP a night to eliminate subjective daytime sleepiness, six hours of CPAP a night to eliminate objective sleepiness (sleepiness that can be tested), and 7.5 hours of CPAP a night to restore full function. Significant life-saving differences are maximized at 6 hours of CPAP a night.
How many CPAP users achieve that level is not generally reported.

Choose the Treatment You Will Use

With the potential for effectiveness essentially equal between these two treatment options, you are free to choose the one that you like better. For most people that we see, CPAP is unpleasant, and people are very happy to find that they have another option.
If you are looking for another effective treatment for your sleep apnea in Omaha, please call (402) 493-4175 today for an appointment with a sleep dentist at the Advanced Dental Sleep Treatment Center.
By Dr. Melissa Sheets|September 21st, 2016|Sleep Apnea|