As if you needed another reason to choose the occasional salad over a cheeseburger or skip a second slice of greasy pizza, along comes a new study that links sleep apnea and other sleep-related problems to a high-fat diet. 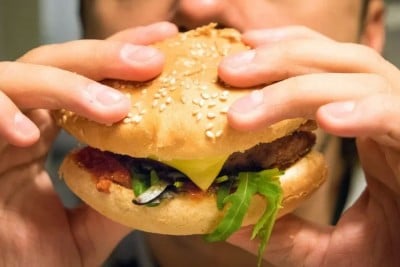 OSA is the most common form of sleep apnea, and it is also the most dangerous. Obstructive sleep apnea is characterized by frequent breathing interruptions during sleep, and it has been associated with an increased risk of high blood pressure, heart disease and heart attack, among other health problems.

According to a New York Times report , the study included more than 1,800 men between the ages of 35 and 80, whose diets were assessed and who were electronically monitored for OSA. After adjusting for other factors that impact sleep, including smoking, alcohol consumption, fitness and medications, researchers found that those in the highest one-quarter for fat intake were nearly 80 percent more likely to experience daytime drowsiness and almost three times more likely to have OSA than those in the lowest one-quarter for fat intake.

One of the most alarming aspects of the study , which was conducted by researchers at Australia’s University of Adelaide, was how few of the study participants reported sleep-related issues compared with how many actually suffered from sleep apnea symptoms. Overall, about 41 percent of the subjects reported daytime drowsiness, and 47 percent said they slept poorly at night; yet 54 percent showed signs of mild to moderate sleep apnea, and 25 percent had moderate to severe sleep apnea.

These results demonstrate the importance of responding to sleep apnea symptoms. Because many sleep apnea indicators show themselves during sleep, those with sleep apnea often don’t know they’re suffering from impaired sleep.

Often, it’s a sleeping partner or family member who may notice symptoms like loud, chronic snoring or episodes of suddenly choking or gasping for air amid sleep. Other symptoms include frequent morning headaches; regularly waking with a sore throat or dry mouth; recurring daytime drowsiness; and an inability to remain focused throughout the day.

Though sleep apnea is dangerous, it is also treatable. Sleep apnea can often be managed with the use of a comfortable, custom-fit oral appliance.
These devices are similar in nature to sports mouthguards, and they are designed to snugly rest over your teeth. They are crafted for your unique bite, and they help hold your jaw in an optimal position and allow you to maintain an open airway during sleep.

Our Omaha sleep dentist has a passion for helping people comfortably treat sleep apnea and restore healthy sleep. If you or a loved one suffers from snoring or other sleep apnea symptoms, please call (402) 493-4175 to schedule your appointment at the Advanced Dental Sleep Treatment Center.