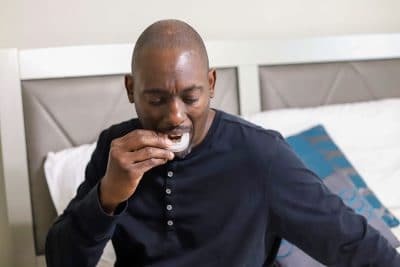 Sleep is a powerful restorative for all parts of your body, including your brain. During sleep, your brain cleans itself of waste chemicals it generates during the day. When the brain can’t do that because sleep apnea interrupts sleep, the waste builds up in the brain, contributing to dementia.

Now a new study gives us hope that oral appliance therapy, a comfortable, convenient alternative to CPAP, can improve the brain’s ability to clean itself, leading to improved cognitive function for many people in just four weeks of treatment. This is an early pilot study, but it gives hope that your Omaha sleep dentist can slow or reverse the effects of Alzheimer’s disease and other forms of dementia with oral appliance therapy.

There are several theories of why this might happen, including changes in the brain, but the dominant theory is that sleep apnea interrupts the brain’s normal cleaning mechanisms.

During the day, the brain generates toxic byproducts during its normal function. At night, it’s supposed to remove those toxic byproducts. The cerebrospinal fluid does this task when the brain is engaged in really deep sleep, just before REM (rapid eye movement) sleep.

When sleep apnea interrupts and disrupts your sleep potentially dozens of times an hour, it’s hard for your body to reach REM sleep or the vital cleaning period before it. Then the brain can’t remove the toxic substances. The substances build-up, creating plaques that interfere with brain function.

Previous research has shown that treatment with CPAP can slow the onset of dementia, but there is less research on the impact of oral appliance therapy. We also don’t have much research on how well sleep apnea treatment can reverse the effects of dementia once it develops.

In a small pilot study, researchers from Texas A&M University looked at 18 people aged 50 to 85 years old. Six of the subjects had Alzheimer’s disease, seven had MCI, and five were cognitively normal.

Researchers found that they could distinguish between the different levels of cognitive impact using their respiration rate during sleep. This supports the theory that breathing impacts the development of Alzheimer’s disease.

Researchers found that when they used an oral appliance (myTAP, similar to some appliances we use for sleep apnea treatment in Omaha), it improved the respiration stability of all groups, especially those with MCI or Alzheimer’s disease.

Researchers interpreted greater improvement for MCI patients as evidence of the need for early intervention in sleep apnea.

Caveats to the Study

Of course, this study comes with several important caveats. Although this research was published in a peer-reviewed medical journal, we have to keep its limits in mind. First, it’s a very small study. Just 18 subjects were treated for four weeks. Second, it’s important to note that the cognitive improvement results were not large enough to be statistically significant. This is partly due to the small sample size but also to the small effect size. After treatment, the cognitive normal group had lower test scores by almost as much as the Alzheimer’s disease group improved. Researchers noted that this was likely normal variation and that people remained above the normal. However, we can’t tell for sure how much of the apparent improvement was also normal variation.

Researchers did achieve a statistically significant improvement in respiration for the MCI and Alzheimer’s disease groups. The hope is that in the future, this could lead to significant cognitive improvement, too. We know that improvements in breathing lead to improvements for our oral appliance patients in Omaha, so it seems likely.

If you are hoping to head off the negative effects of sleep apnea, such as dementia, let the Advanced Dental Sleep Treatment Center in Omaha help. We help patients from Omaha and the surrounding region to get the sleep apnea treatment that’s best for them. This might be CPAP, or it might be oral appliance therapy, depending on their characteristics.