Woman Who Stabbed Snoring Husband May Not Be Fit for Trial

It’s an all-too common story: the husband snores and the wife can’t sleep. It leads to tension and arguments. She moves into another room to sleep. But this story had an uncommon ending.

According to charges the wife, still unable to sleep, takes a butcher knife and repeatedly stabs her husband. Although a trial date has been set, the woman is waiting for a psychological evaluation to determine whether she is mentally fit to stand trial.

A Fight over Snoring Leads to Stabbing 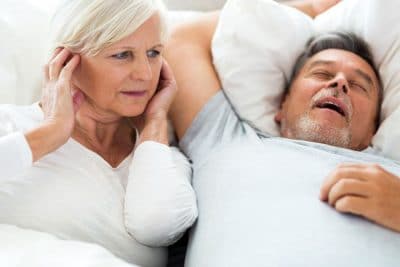 Apparently, the wife had been bothered by her husband’s snoring for a long time. She communicated on Twitter about her problems with his snoring and her attempts to get him to go to a sleep doctor for help.

According to charges, on the night in question, the two had a fight over his snoring that led to her going to sleep in another room with one of their children. In the middle of the night, she found herself unable to sleep, perhaps because she could still hear his snoring. She went into the kitchen, got a butcher knife, and stabbed her husband several times before he was able to get the knife away from her. Aided and protected by his teenage sons at this point, he called 9-1-1.

The wife initially told police that her husband had been stabbed by an intruder. Later she admitted she stabbed her husband and hid the evidence.

Her trial is now set for June, but before the trial she will be evaluated to determine whether she is mentally fit to stand trial.

Snoring disputes happen every day in every town across this country, from Arkansas where this attack occurred to right here in Omaha. The problem with snoring disputes is that neither party is capable of being in their right minds at the time of the dispute. Snoring is a sign that you’re experiencing impaired breathing at night. It may even be sleep apnea , but even if it’s technically not sleep apnea your brain isn’t getting enough oxygen while you sleep, so the snorer isn’t well rested. The snorer’s spouse obviously isn’t well rested, either.

As a result, it’s common for people to get into arguments that may or may not be directly about snoring, but they hinge on the problem.

Are You Mentally Fit?

If you are fighting with your spouse often and either you or they snore, it’s important to try to resolve your snoring and/or sleep apnea before things get out of hand. Even if it doesn’t lead to violence, it can lead to a divorce or other irrevocable decisions that you may regret.

For help with snoring in the Omaha area, please call (402) 493-4175 for an appointment at the Advanced Dental Sleep Treatment Center today.

The post Woman Who Stabbed Snoring Husband May Not Be Fit for Trial appeared first on Sleep Omaha.