Sleep apnea is a potentially deadly condition that leads to many serious health risks. Heart attack, stroke, pulmonary embolism, anesthesia complications, and even car accident risks are increased in sleep apnea sufferers. Worst of all, perhaps 90% of people who suffer from it don’t know they have it.

Sleep dentist, Dr. Melissa Sheets has good news, though: sleep apnea treatment is very successful and covered by most insurance. Dr Sheets is the leading sleep apnea dentist in the region an as such we have treated patients not only from Omaha Nebraska, but all over Nebraska and the Midwest. If you have been diagnosed with or suspect you have sleep apnea, please call (402) 493-4175 or email Dr. Sheets for a consultation about your treatment options.

What is Sleep Apnea?

Sleep apnea is when your breathing stops at night. It stops long enough that your blood oxygen level drops and your brain senses danger. It awakens a little to get you breathing again, as well as to tell your heart to pump harder and faster, just in case that was the problem.

Because you don’t fully wake up, you may not be aware of the cause of your wakefulness, or if you become fully awake, you might think it was because you had to go to the bathroom or due to some random noise. But this happens up to several hundred times a night, with the consequence that your brain can’t ever reach the deep restorative sleep stages it needs, and your heart is being told to beat harder and faster, causing blood pressure spikes and putting strain on your heart and blood vessels.

There are two main types of sleep apnea. Obstructive sleep apnea (OSA) affects the vast majority of sufferers. This type occurs because your airway collapses when you sleep: you are literally suffocating. During the day, our airway is held open by gravity and by your muscles. But when you sleep, your muscles relax and the tissue of your throat can close if they are unsupported. If your jaw is out of position, you are overweight, or you have an anatomically narrow airway, your airway is likely to collapse.

The less common type is central sleep apnea. In this type, your brain simply stops telling your body to breathe. The causes for this form of sleep apnea are not yet fully understood.

Snoring and Other Symptoms of Sleep Apnea

Snoring is very common, and many people disregard it as a nuisance. However, snoring is often a sign that you’re at increased risk for obstructive sleep apnea. Snoring is caused by an airway that narrows during sleep, causing a turbulent airflow, which causes your throat to vibrate, what we hear as snoring.

If you snore and have any of the symptoms above, it’s important to undergo a sleep study provided by a sleep physician to get a diagnosis. After a sleep study, it can be determined whether or not you suffer from sleep apnea and if your snoring problem requires treatment.

Sleep apnea has been associated with numerous serious, even life-threatening health conditions, including:

Among numerous others. Treating it can reduce the danger of this condition. 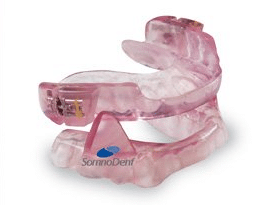 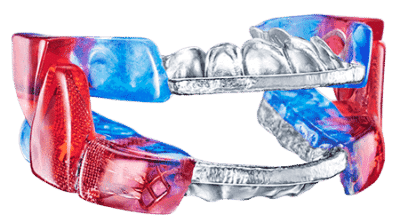 There are many good treatment options for sleep apnea. CPAP is the most common treatment recommended, but oral appliance therapy is increasing in popularity because it is more comfortable and convenient, which often results in more successful treatment.

There are variety of oral appliances available for dental sleep treatment, and each of them works a little differently. At Advanced Dental Sleep Treatment Center of Omaha, we recommend oral appliances based on the unique challenges that each of our patients face.

Most of the oral appliances available are classified as mandibular advancement splints. These mouthpieces work by gently repositioning the lower jaw to open the airway. This lessens or eliminates the likelihood of an airway obstruction occurring, which is the cause of OSA events.

In patients who suffer from central sleep apnea or complex sleep apnea, the TAP-PAP oral appliance can be used in conjunction with CPAP to make treatment more comfortable and effective.

Since snoring is a common symptom of sleep apnea, don’t wait to schedule an appointment with Dr. Sheets to learn more about snoring, sleep apnea, and the treatments that are available for both conditions. Ready to get started? Call our office at (402) 493-4175 or email us today.